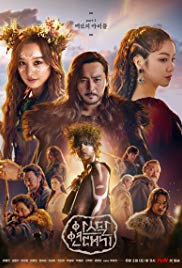 Eun Som, a cursed child born in Blue Stone Village under an ominous sign. He later becomes a conqueror of Asadal, taking it from city-state to empire. Ta Gon, a war hero among the Saenyeok Tribe and master of strategy. He is ambitious and aims to become the first King of Asadal. Tan Ya, a woman born under a cursed sign who overcomes adversity to become the first female politician of Asadal. She is Eun Som's first love. Tae Ha, the last surviving neonatal, a race different from humans, as well as the first Empress of Asadal.